What is a word embedding?

When constructing a word embedding space, typically the goal is to capture some sort of relationship in that space, be it meaning, morphology, context, or some other kind of relationship.

By encoding word embeddings in a densely populated space, we can represent words numerically in a way that captures them in vectors that have tens or hundreds of dimensions instead of millions (like one-hot encoded vectors).

A lot of word embeddings are created based on the notion introduced by Zellig Harris’ “distributional hypothesis” which boils down to a simple idea that words that are used close to one another typically have the same meaning.

Why do we use word embeddings?

Words aren’t things that computers naturally understand. By encoding them in a numeric form, we can apply mathematical rules and do matrix operations to them. This makes them amazing in the world of machine learning, especially.

Take deep learning for example. By encoding words in a numerical form, we can take many deep learning architectures and apply them to words. Convolutional neural networks have been applied to NLP tasks using word embeddings and have set the state-of-the-art performance for many tasks.

Even better, what we have found is that we can actually pre-train word embeddings that are applicable to many tasks. That’s the focus of many of the types we will address in this article. So one doesn’t have to learn a new set of embeddings per task, per corpora. Instead, we can learn general representation which can then be used across tasks.

So now with that brief introduction out of the way, let’s take a brief look into some of the different ways we can numerically represent words (and at a later time, I’ll put together a more complex analysis of each and how to actually use them in a down-stream task).

One of the most basic ways we can numerically represent words is through the one-hot encoding method (also sometimes called count vectorizing).

The idea is super simple. Create a vector that has as many dimensions as your corpora has unique words. Each unique word has a unique dimension and will be represented by a 1 in that dimension with 0s everywhere else.

The result of this? Really huge and sparse vectors that capture absolutely no relational information. It could be useful if you have no other option. But we do have other options, if we need that semantic relationship information. I also have an post now about how to use count vectorization on real text data! If you’re interested, check it out here: Natural Language Processing: Count Vectorization with scikit-learn

TF-IDF vectors are related to one-hot encoded vectors. However, instead of just featuring a count, they feature numerical representations where words aren’t just there or not there. Instead, words are represented by their term frequency multiplied by their inverse document frequency.

In simpler terms, words that occur a lot but everywhere should be given very little weighting or significance. We can think of this as words like the or and in the English language. They don’t provide a large amount of value.

However, if a word appears very little or appears frequently, but only in one or two places, then these are probably more important words and should be weighted as such.

Again, this suffers from the downside of very high dimensional representations that don’t capture semantic relatedness. 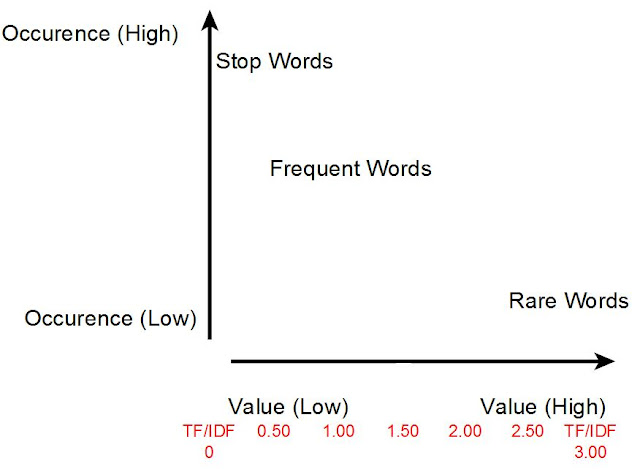 A co-occurrence matrix is exactly what it sounds like: a giant matrix that is as long and as wide as the vocabulary size. If words occur together, they are marked with a positive entry. Otherwise, they have a 0. It boils down to a numeric representation that simple asks the question of “Do words occur together? If yes, then count this.”

And what can we already see becoming a big problem? Super large representation! If we thought that one-hot encoding was high dimensional, then co-occurrence is high dimensional squared. That’s a lot of data to store in memory.

Now, we can start to get into some neural networks. A neural probabilistic model learns an embedding by achieving some task like modeling or classification and is what the rest of these embeddings are more or less based on.

Typically, you clean your text and create one-hot encoded vectors. Then, you define your representation size (300 dimensional might be good). From there, we initialize the embedding to random values. It’s the entry point into the network, and back-propagation is utilized to modify the embedding based on whatever goal task we have.

This typically takes a lot of data and can be very slow. The trade-off here is that it learns an embedding that is good for the text data that the network was trained on as well as the NLP task that was jointly learned during training.

Word2Vec is a better successor to the neural probabilistic model. We still use a statistical computation method to learn from a text corpus, however, its method of training is more efficient than just simple embedding training. It is more or less the standard method for training embeddings the days.

It is also the first method that demonstrated classic vector arithmetic to create analogies:

There are two major learning approaches.

This method learns an embedding by predicting the current words based on the context. The context is determined by the surrounding words.

This method learns an embedding by predicting the surrounding words given the context. The context is the current word.

Both of these learning methods use local word usage context (with a defined window of neighboring words). The larger the window is, the more topical similarities that are learned by the embedding. Forcing a smaller window results in more semantic, syntactic, and functional similarities to be learned.

So, what are the benefits? Well, high quality embeddings can be learned pretty efficiently, especially when comparing against neural probabilistic models. That means low space and low time complexity to generate a rich representation. More than that, the larger the dimensionality, the more features we can have in our representation. But still, we can keep the dimensionality a lot lower than some other methods. It also allows us to efficiently generate something like a billion word corpora, but encompass a bunch of generalities and keep the dimensionality small.

GloVe is modification of word2vec, and a much better one at that. There are a set of classical vector models used for natural language processing that are good at capturing global statistics of a corpus, like LSA (matrix factorization). They’re very good at global information, but they don’t capture meanings so well and definitely don’t have the cool analogy features built in.

GloVe’s contribution was the addition of global statistics in the language modeling task to generate the embedding. T here is no window feature for local context. Instead, there is a word-context/word co-occurrence matrix that learns statistics across the entire corpora.

The result? A much better embedding being learned than simple word2vec. 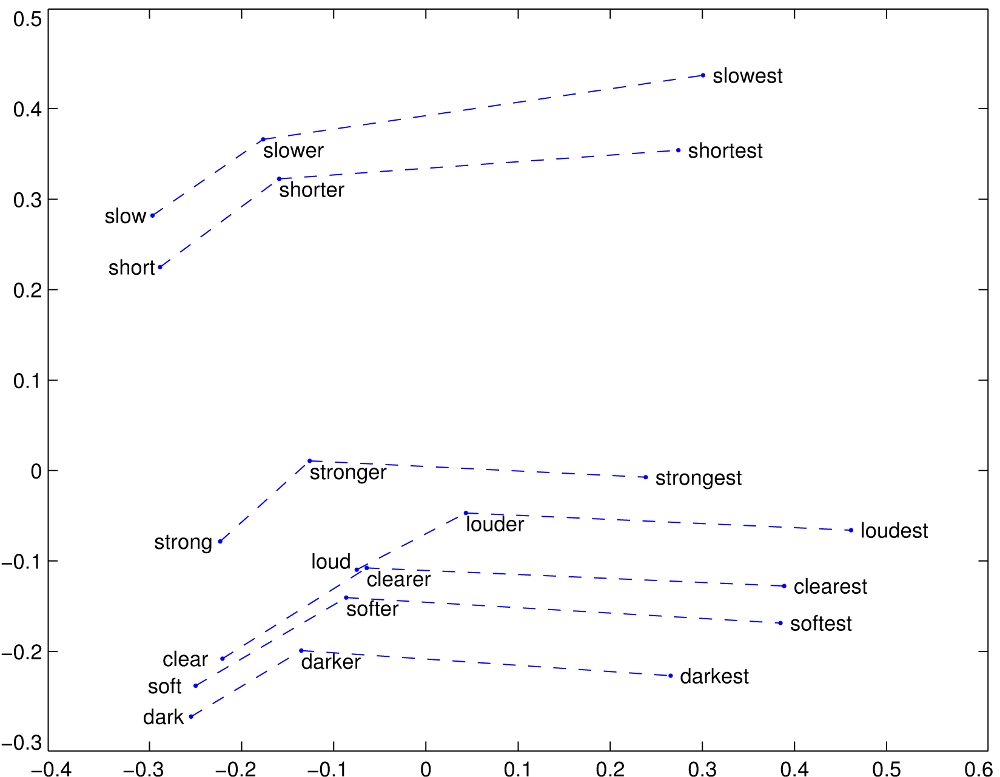 Now, with FastText we enter into the world of really cool recent word embeddings. What FastText did was decide to incorporate sub-word information. It did so by splitting all words into a bag of n-gram characters (typically of size 3-6). It would add these sub-words together to create a whole word as a final feature. The thing that makes this really powerful is it allows FastText to naturally support out-of-vocabulary words!

This is huge because in other approaches, if the system encounters a word that it doesn’t recognize, it just has to set it to the unknown word. With FastText, we can give meaning to words like circumnavigate if we only know the word navigate, because our semantic knowledge of the word navigate can help use at least provide a bit more semantic information to circumnavigate, even if it is not a word our system learned during training.

Beyond that, FastText uses the skip-gram objective with negative sampling. All sub-words are positive examples, and then random samples from a dictionary of words in the corpora are used as negative examples. These are the major things that FastText included in its training.

Another really cool thing is that Facebook, in developing FastText, has published pre-trained FastText vectors in 294 different languages. This is something extremely awesome, in my opinion, because it allows developers to jump into making projects in languages that typically don’t have pre-trained word vectors at a very low cost (since training their own word embeddings takes a lot of computational resources).

If you want to see all the languages that FastText supports, check it out here.

ELMo is a personal favorite of mine. They are state-of-the-art contextual word vectors. The representations are generated from a function of the entire sentence to create word-level representations. The embeddings are generated at a character-level, so they can capitalize on sub-word units like FastText and do not suffer from the issue of out-of-vocabulary words.

ELMo is trained as a bi-directional, two layer LSTM language model. A really interesting side-effect is that its final output is actually a combination of its inner layer outputs. What has been found is that the lowest layer is good for things like POS tagging and other more syntactic and functional tasks, whereas the higher layer is good for things like word-sense disambiguation and other higher-level, more abstract tasks. When we combine these layers, we find that we actually get incredibly high performance on downstream tasks out of the box.

The only questions on my mind? How can we reduce the dimensionality and extend to training on less popular languages like we have for FastText.

Probabilistic FastText is a recent paper that came out that tried to better handle the issue of words that have different meanings, but are spelled the same. Take for example the word rock. It can mean:

How do we know what we are talking about when we encounter this word? Typically, we don’t. When learning an embedding, we just smush all the meanings together and hope for the best. That’s why things like ELMo, which use the entire sentence as a context, tend to perform better when needing to distinguish the different meanings.

That’s also what Probabilistic FastText does really well. Instead of representing words as vectors, words are represented as Gaussian mixture models. Now, I still don’t understand the math really well, but a lot of the training schema is still similar to FastText, just instead of learning a vector, we learn something probabilistic.

I’m very curious to see if this stream yields future research as I think moving away from vectors is a very curious way to go.